google-site-verification: googleadc37a0c4ce3f62d.html
This is a website showcasing the lovely chickens that I own.  I have several different breed, and I love them all!  I'm sure it will take me a while to complete this site, so please be patient with me during the construction process.  So, what breeds do I have?  Welsummers, Sulmtalers, Lavender Cuckoo Ameraucana, Tomaru (Long Crowers), Bantam Silver Duckwing Welsummers, D'Uccles and Cream Legbars.  I used to have Barnevelders, but no longer have them due to lack of space.

My eventual goal is to provide pictures and education on each of these breed.  I also want to use this site to keep people updated on the different breed projects I'm working on currently.  I have two projects right now, Cuckoo Patterned Lavender Ameraucana and Large Fowl Silver Duckwing  Welsummers.


Shipped Egg
When buying shipped eggs, people always ask me "how to you pack" and "what is your success rate"
So, I thought I would share a few success stories that demonstrate that I pack well and deliver the best possible eggs that I can.

The first is a successful shipment to the Bahamas - after completing all of the importing paperwork I coordinated a shipping date with the buyer.  Shipping express direct to the Bahamas was too expensive, so we decided to ship at a time while she was in the USA.  So, while she was visiting family I shipped to her - IN WASHINGTON state!  So the eggs shipped from WV to the state of Washington, then she few home with them to the Bahamas.  She ended up with a 60% hatch rate. Not great, but given the circumstances I thought it was amazing.

Next, a quote from another customer, this one in Alaska:

Looks like 18 made it her safely 14 made it to lock down 10 Hatched so far and one is working on it so I'd say it was great. I even had a ﻿power failure then a heat spike of 105 3 days before lock down ﻿and when I opened the others looks like that's when I lost them. I had my fingers crossed for days. Shipped from West Virginia to Alaska

And finallly the result of an order of 18 eggs sent to South Carolina:


Diane 12 hatched 5 was fully developed but never pipped one was blood ring. I incubated in a cabinet Dickey then hatched in my little havobator. Must been off a little at lockdown. This is great on shipped eggs. Will get you pic's later. THANK YOU 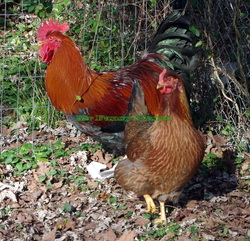 Welsummer Rooster and Hen
My Welsummers are probably my favorite breed, although being an addict, there's no way I could pick just one breed.
Welsummers lay a beautiful terracotta colored eggs. My first Welsummers were from hatchery stock, and I soon realized they weren't really what I was looking for in a flock.  I then started researching breeders and got lucky.   My current flock is from the lines created by Nate Vanwey. Nate raised a hardy flock and bred to the standard of perfection.  I hatched eggs from Mr. Vanwey in 2010, and I've been in love with this flock ever since.


While maintaining the standard is an ongoing process, I was lucky to have some great stock to start my flock.  Some of my birds best traits are: calm roosters, very consistent coloring and size within the flock (and to successive generations), bright yellow legs, and dark egg color.

Welsummers
If you look at the picture below you'll notice the eggs marked with a W - these are my Welsummer eggs from 2012. 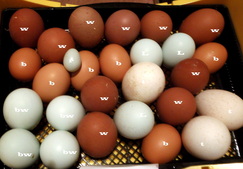 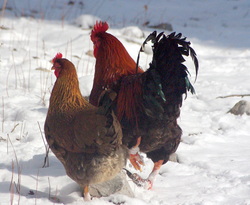 A pair of adult Welsummers free ranging in the snow. 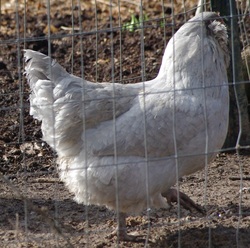 Lavender Cuckoo Ameraucana Hen
Lavender (self blue) Ameraucana are technically considered non standard colored Ameraucana.   Lavender is not an accepted color for the breed.  Some people refer to this type of mutt as an Easter Egger.  This is a little unfair, as the breed meet all of the standards except coloring.  Lavender is a recessive gene, and to maintain good coloring,  they should be bred back to black Ameraucana.  This crossing creates splits, which is a bird that is black in color, but carries the lavender coloring gene.  The cuckoo pattern is a color project - so the eggs are still a little on the greenish side.  They are a work in progress and the flock should be selectively bred to eliminate faults.  Common faults are gold/yellow streaks in rooster's hackles and single combs.  I'm on my fourth generation of this breed; I am seeing some gold in the roosters saddle and hackles, but its better with the 4th gen than it was with the 3rd.(other off traits such as single comb could still be lurking in the mix though)   All of my current stock originated from Amy Balog (AKA HappyMtn/GooseandFig)  They are a work in progress, but selective breeding continues to lead to steady improvement.
Lavender Ameraucana 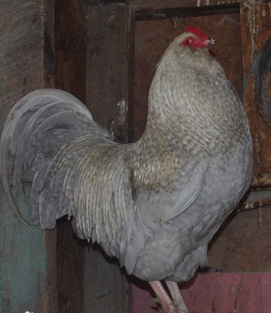 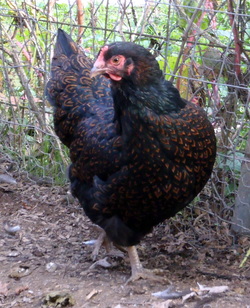 vB line Barnevelder Hen
Barnevelders... beautiful birds, affectionately known as Barnies.  A lot of people think Barnies lay dark brown eggs and I think some people picture a Maran type egg.  Historically and in some strains/lines, they do lay a fairly dark eggs.  Most lines eggs tend to be more of a coppery brown in color that I would not consider to be "dark" but medium brown (its really kind of hard to describe)  If you look at the picture at the bottom of the Welsummer section, the eggs marked with a "b" are Barnevelder eggs.  As with the Welsummers, I started with hatchery stock but realized that I wanted more.  I then purchased from a couple of different breeders, and was still dissatisfied with the look of the birds and the egg color (among other issues see ****)  I finally decided to go with a breeder that had been working with these birds for many years and developed her own line.  Christina Leford, known for her Peace of Thyme website, developed the vB line of Barnevelders.  I purchased 2 sets of eggs from her and ended up with some beautiful birds.  I also added birds from Mountain Ridge Poultry.

I have since sold off the flock - but I still love this breed. 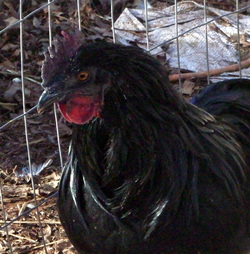 We added three new breeds in 2012.  The first of these is the Tomaru.  My husband's first reaction -WHY?  My response, why not?  When I first started looking for this breed, I realized there is not a lot of information available, and hatching eggs weren't easy to find.  I purchased one set from a breeder who's flock is from Sand Hill Preservation.  The other set was from a breeder in Pennsylvania.

Tomaru are a Japanese bird.  I have not had time to research in depth the history of the different flocks in the US.  They hatch black and white and mature very very slowly.  Their feathers are beetle black and the males will get a longer tail than the average rooster. Combs start out black, but develop red coloring.  The eggs from both breeders were small to medium in size (larger than a Silkie, smaller than a standard large).  I've noticed that the growing birds look very much like my young turkeys in shape, more game like in appearance than my other chicken breeds.

While breeders in Japan are getting 15-20 second crows, most US breeders state 5-7 seconds as their mark.  I was also told that truly long crows won't occur until the second year, and even then, its only every 8-10 crows that is long. (so don't be afraid of ticking off the neighbors)

We expect to have hatching eggs in the spring of 2015 - use the contact form to check availability. 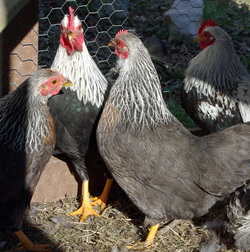 Bantam Silver Duckwing Welsummer Hen
A little bird with a big name, who shall be called BSDW for the rest of this page! I noticed that a lot of people were asking if there were Large Fowl SDW in the US, and to my surprise, nobody knew of anyone breeding them.  Importing new breeds to the US is an expensive proposition, so I started my brain working and thought I would try starting with the BSDW and work on breeding them up in size.  Little did I know how much I would like the bantams themselves!

I bought my hatching eggs from Erhard Weiss in Washington.  Its my understanding that he imported them (and gold wing bantams) from Europe via Canada.  For those of you that don't know, Washington is a long way from West Virginia.  I had two shipments and some rough hatches.  I finally ended up with 2 roos and 2 hens.  Before I start working on any plan to breed these with my large fowl, I'm going to have to make some more of these little guys.  My plan for 2013 is to pick the best hen and roo of the 4 and hatch out some for myself in early March.  After that, I'll probably sell some hatching eggs on a very limited basis.  Once the second generation starts producing, I'll then work on breeding them with the LF Welsummers. 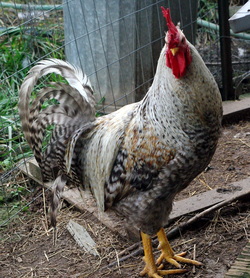 Crested Cream Legbar Cockerel and Pullet
Obtaining this breed proves I'm a true addict.  One look at this breed and I knew I had to have some.  They have have a beautiful feather pattern, a cute crest and lay blue eggs.  These guys laid well all spring and summer, only taking a break when I moved their pen.  I purchased them as chicks from Greenfire Farms.

Cream Legbars were developed in England during the 1930's.  The were developed by crossing Barred Plymouth Rock, Brown Leghorn and Araucana. One of the best things about this breed is that they are autosexing, which means you can tell the sex of the chick at a day old.  They used to be called Crested Cream Legbars but this was changed to Cream Legbar. Per several sources, they 180+ eggs per year.  I'm very excited to have these birds as part of my flock!  These birds are not an APA breed, but there are groups working on developing a Standard of Perfection (SOP).  I'll be sure to share information as I get it so anyone buying eggs will know what traits to breed.
Cream Legbar 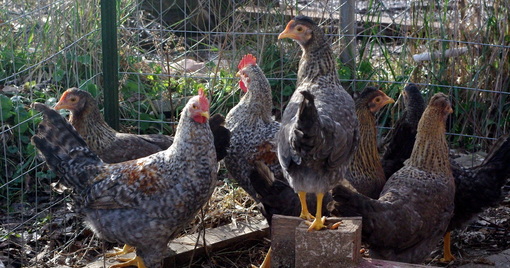 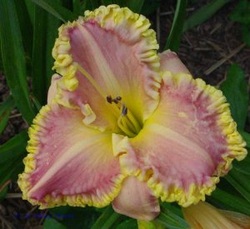 I have to take the time to thank my husband Mike.  He has supported me through this crazy addiction.  He feeds and waters, builds coops and wrangles birds on a regular basis.  I couldn't have the flocks that I do without his support!  He is the owner of a wonderful nursery and specialized in hybridizing unique daylilies.  If your interested in a flower that chickens don't damage, daylilies are wonderful.  They hold up to a lot of abuse from the birds and keep coming back.

So click on the lily picture to the left and check out Mr. Fancy Plants Daylily Nursery! 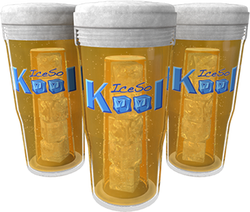 The best tumblers for keeping your drink cold without letting it get watered down!